Feel free to make what you will out of THIS crazy dream!

I was in a huge, cavernous shopping mall of some type with some of my friends (I couldn’t tell which ones). I didn’t know exactly where the mall is, but somehow it was a cross between Japan and Paris.

The mall was an odd shape, with a narrow stairwell (it reminded me of being in Notre Dame, with the steep concrete stairs and little windows looking out on the world) that would wind its way up to the next floor. Along each stairwell there were open buckets of all kinds of goodies—candy, toys, small fun items (like the bulk section of Whole Foods), and I understood that you were supposed to take what you wanted and bring it to the nearest register. But it was so tempting to just take a few small things and stick them in your coat pocket. I didn’t . . . at least not yet.

Even though it was indoors, everyone was wearing coats. It was so tight in that stairwell, people were jammed together in two lines, like going up the escalator from the train to the main floor in Penn Station. When you reached each floor, the space was wide open and there were vendors everywhere. No actual stores, just people at kiosks or just standing there selling their wares. It reminded me of the artists lined up along the streets and bridges in Paris.

Each main floor of the mall was so huge, it echoed. At each floor there was some kind of performance, and the point of each performance seemed to be to scare people into thinking they were going to run into you. One group of performers was dressed up like huge robots or transformers, all in black and on stilts. They were terrifying.

At the next stairwell, I couldn’t help myself and I took a handful of Swedish Fish, but for some reason each one was on a stick. Swedish Fish Skewers. I kept trying to get them in my pocket, but the stick was in the way and the crowd kept shoving me. I dropped two, and held onto one, hoping there were no hidden cameras.

At the next open level, one of my friends wanted to go look at something and I tried to follow her but instead I went looking for a trash can to throw away the Swedish Fish so I wouldn’t get in trouble. A group of performers on bicycles appeared, careening all around me, and one came to a skidding halt right in front of me.

I ran, but realized that I dropped the Swedish Fish. I looked back and saw it on the floor, and for some reason I was so sad, but I kept running.

And that was it. 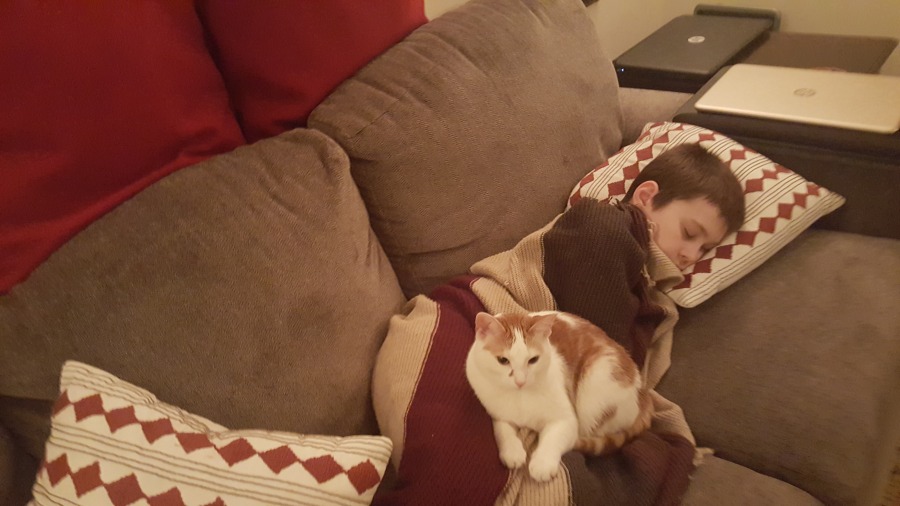 It all started with a case of gender confusion. One of our “twin” cats, Baxter (sister and brother, actually, but they were practically identical), had just passed away after a fairly long and ugly battle with stomach cancer. I wasn’t ready for another cat, but my family had other ideas.

I left for a trip just before the 4th of July, and my parting instructions were: “Don’t get another cat while I’m gone. But if you do, make sure it’s a girl. We don’t want another boy cat beating up poor Betty.” We loved Baxter more than anything, but he really could be an asshole when he wanted to be. Which was any time (1) Betty was anywhere near, (2) he spied something on a surface that should be knocked off–preferably glass and breakable–and (3), breakfast time, which could start as early as 4am with insistent yowling. So, basically most of the time.

There’s Betty. A softy at heart, but always ready with a few claws if necessary. 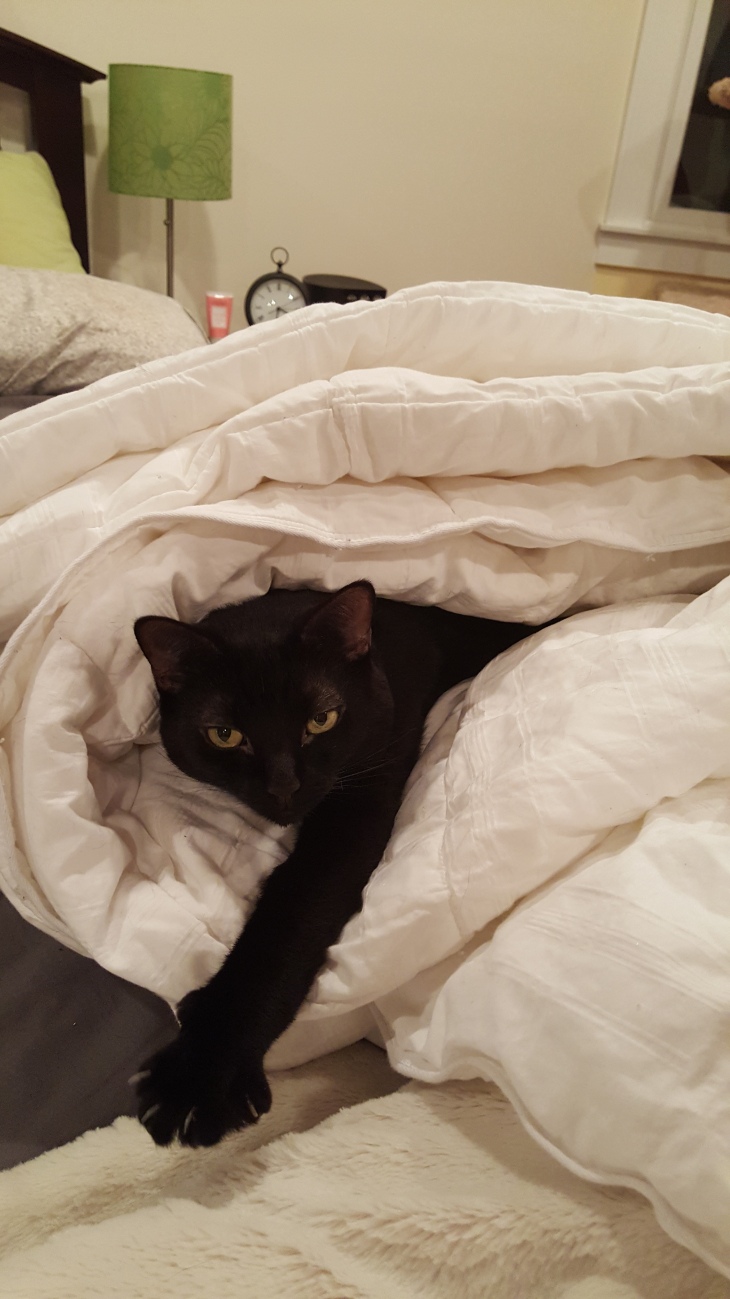 I wasn’t surprised when I started getting texts with photos of an adorable orange and white kitten. 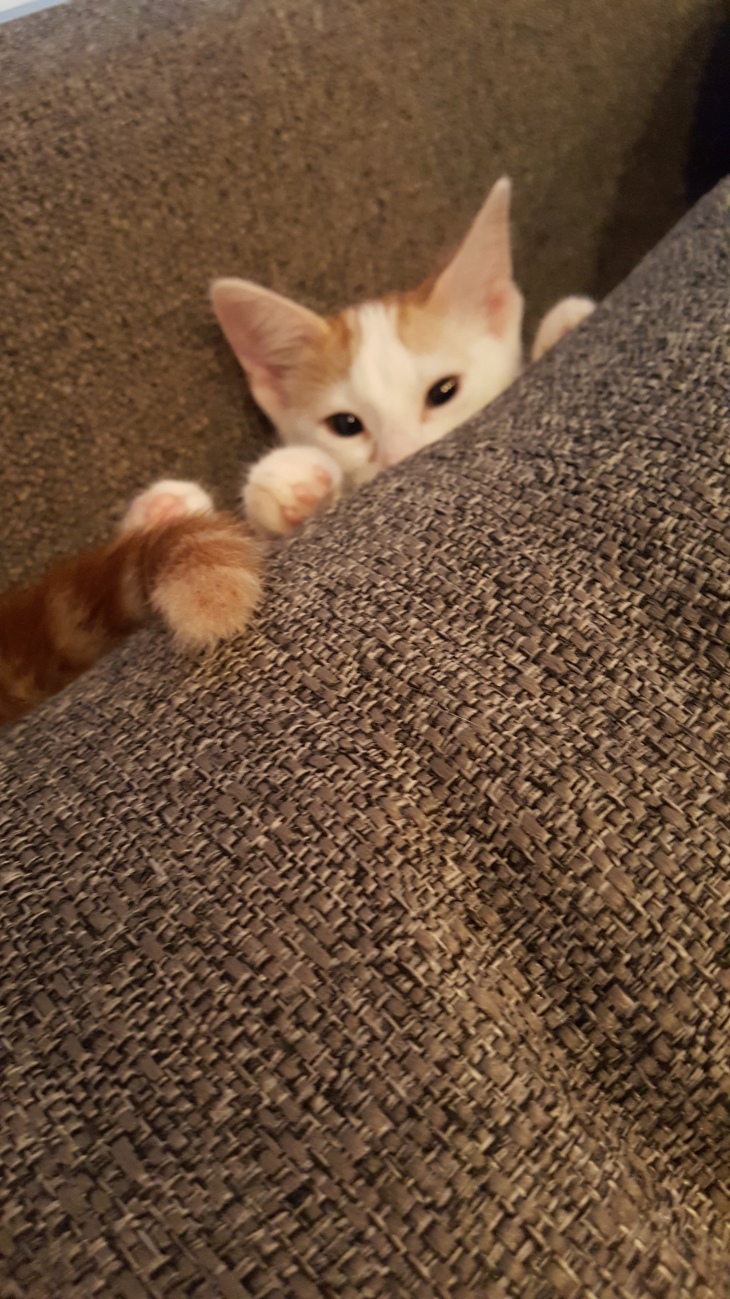 He was the cutest little thing, athletic and possessing an impressive alley cat swagger at only 3 months. We decided to keep the name Waldo, thinking how fun it would be ask “Where’s Waldo?” every time we were looking for him. There’s no way that would get old, right?

The time came to have Waldo neutered. I took him to the home of the woman his foster mom recommended for his last distemper shot, and she offered to make the appointment through the vet she works with. She flipped him around to have a look at his rear end, and said “Uh . . . I think you mean spayed. This one is a girl!” 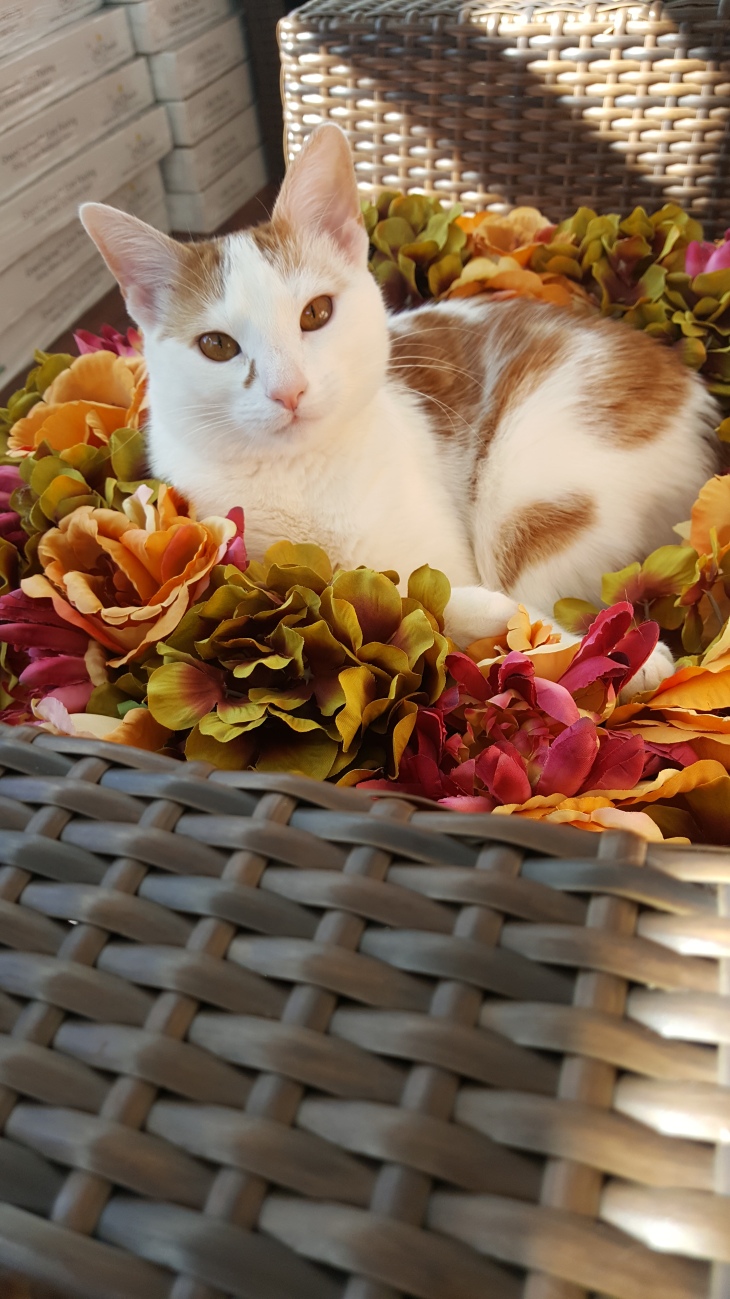 We didn’t want to change his–er, her name too drastically, and Wilma was a good fit with Betty, if you’re a fan of the Flintstones. Their coloring even matched their names: Betty has black hair, and Wilma is mostly orange. Cute, right?

Every morning when it’s time for breakfast, I’ll start calling all of her names (and a few for Betty, just to make sure she doesn’t feel left out), and by the time I finish running through them all, they have both finished eating and are settling down for their morning nap.

Next, I suppose we’ll have to round out the family with a Fred, Barney, Pebbles, Bam-Bam and Dino. I can only imagine how long breakfast will take.